Is This the Sound of a Kingdom Falling?

The title of this post is derived from one of my favorite novels, A Storm of Swords. The scene the line is from is one wherein one of the major characters, Catelyn Stark, is worrying over her son, newly crowned King of the North, and the fact that his war of rebellion against their political enemies is not going his way. Such appears to be the case with one Michelle Bachmann and her budding (until now) political aspirations.

I like Michelle Bachmann. I agree with her Tea Party friendly message, and I like her record as well. However, after her slew of gaffs involving the Gardasil issue, it appears to me, your humble Crusader for Constitutional Justice, that her campaign has, as Rush Limbaugh put it recently, jumped the shark. Unfortunate, too, because I was looking forward to seeing the first female President of the United States, especially in light of the attacks calling the Republican Party anti-woman. I was hopeful from the beginning. "Run, Michelle, run", I was always saying back even before it was hinted at that she would announce her candidacy. Of course, by the time I heard she was running, I had already begun to get sucked into the Herman Caine Camp. I had a choice to make, and had made it,  yet now with Cain doing so poorly in the polls, and Bachmann's campaign folding like an origami crane, I may find myself believing more and more that Rick Perry will end up being the nominee for the Republicans this time around.

I believe, however, that my belle Michelle still has a chance to snag the nomination if she enters damage control mode. Unfortunately, according to Hot Air, rather than backpedal on the issue, she doubled down with an anecdote about a mother who supposedly became mentally retarded as a result of being medicated with Gardasil. This only hurts the woman in the long run. I hope she is able to see the error of her ways, because all in all,  I believe that Michelle Bachmann is, despite her mistakes, the best candidate to become our new leader of the free world. Here's to hoping she does, and that I'm right.
This Attack Defended by ArthurRex12 at 5:28 PM No comments: Links to this post

Mirror Mirror, on the Wall...

I believe, dear readers, that we have been thrown into a parallel universe. I know most of you think we were thrown into one in 2008 when Obama was elected and began his assault on our freedoms, but I say you nay. It is only now that we've been forced to face the mirror images of those who inhabit the so-called Mirror Universe. I haven't been following the news as much as in the past recently, but I've still been keeping up with Hot Air, so I've got a semblance of what's going on. I've been keeping track of Teh Wun's reelectability (is that even a word?) for the last few months, and the signs don't look too good for him, despite Michelle Baachman's recent gaffe regarding Gardasil, and Perry's scandal from umpteen million years ago coming to light. His reelect numbers keep dropping at a steady pace even in Smurf states. Don't believe me? Check this out. Yep. You read that right, fellow crusaders. DWS, the new airhead of the DNC, has the audacity to claim that New York District 9 is a difficult district for Democrats despite the fact that a Republican hasn't held that seat since the COOLIDGE ADMINISTRATION!!!! I would laugh if it wasn't so sad.

It seems yet again, I must ask the question: 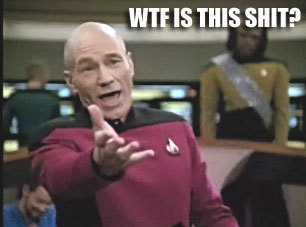 This Attack Defended by ArthurRex12 at 6:42 PM No comments: Links to this post

I just got this hat tip from Chicks on the Right's Facebook post: Ron Paul has apparently turned to the left in his views on why 9/11 happened. Ron Paul was never my guy. Way too much of an isolationist, in my view, in a world where the United States can no longer completely cut itself off from the rest of the globe. His views are his, however, and I respect his right to have them. However, he will not win the presidency if he starts spouting garbage like THIS:

That, for those of you who didn't watch, is Ron Paul, potential nominee for the Republican Presidential ticket, spouting the same garbage that Osama Bin Laden and Al Quaeda have been spouting for the last ten years. There was a time when I thought I might actually vote for Ron Paul. Not anymore.
This Attack Defended by ArthurRex12 at 8:29 AM 1 comment: Links to this post

Okay, someone explain to me why this is a Problem..?

Thaanks to Chicks on the Right for posting this first: Guess what, clever and competent crusaders for constitutional justice. Another university is so chock full of politically correct idiocy that they're refusing to honor the victims of 9/11 unless...and I kid you not...

You see, Marietta College is “threatening to cancel a 9/11 memorial planned by their students if flags from other countries are not observed in the activities as well.


Let's let that sink in for a second, shall we? This college is threatening to shut down a 9/11 tribute just because it's not fair that other countries aren't being represented. I ask...why on Earth would other countries need to be represented? Well, according to the school, it's because "other nationalities were killed at the twin towers as well." Umm...yeah, ethnicities besides white people were killed at 9/11 (including at least 13 Muslims...oops was that too politically incorrect? Eh, whatever.)


Listen up, Marietta College! 9/11 HAPPENED IN AMERICA! THEREFORE THE AMERICAN FLAG IS THE ONLY ONE THAT NEEDS TO BE FLOWN TO REPRESENT THE VICTIMS BECAUSE THEY WERE ALL LIVING HER AT THE TIME OF THE ATTACKS! IS THAT REALLY TOO MUCH FOR YOU TO COMPREHEND!?


Or, I believe I can sum this up more simply with a little help from Captain Jean-Luc Picard:

This Attack Defended by ArthurRex12 at 8:47 PM No comments: Links to this post

Minds changed by this blog